Barbara Thomas was a local girl who attended Presbyterian Ladies’ College at Pymble from 1919 to 1924. During her time at the College, Barbara was a member of the Athletics, Netball and Hockey teams and received her Leaving Certificate in 1923. College records note her as Dux of the College in both 1923 and 1924.

Barbara had already graduated in Arts from Sydney University and was in her second year of medical studies when a sporting career beckoned. She represented Australia internationally as a member of the first Australian women’s hockey team in 1930, staying on in London at the conclusion of the tour to continue her studies at St Thomas’ Hospital. She graduated as a massage student (a physiotherapist in today’s language) in 1933, and joined the staff at St Thomas’, specialising in pre- and post-natal care. She became the demonstrator for the Head of Physiotherapy at St Thomas’, Sister Randell, with whom she developed special pre-natal exercises, established clinics throughout England and collaborated on a book called Training for Motherhood.

In 1937 Barbara returned to Sydney for six months, providing her services to the Department of Public Health to make a film about pre- and post-natal exercises for mothers. During her visit she played in ex-students’ hockey teams competing against current students.

On 10 September 1940, London was bombed during a series of air raids and Barbara was trapped in the wreckage of the nurse’s wing for 12 hours. She died before she was rescued, aged 32 years.

Barbara is buried in Lambeth Cemetery in London.

She is recognised in a Nurses Memorial at St Thomas’ Hospital along with three other nurses. At Pymble, a plaque was placed along the Colonnade in her honour.

It was with a great sense of shock that we read of the death of Barbara Thomas during an early air-raid in London. She was on duty in St Thomas’ Hospital when that building was bombed.

Barbara was a student of the College from 1919 to 1924. In 1924, she was a school Prefect and DUX of the school in schooldays. She graduated Bachelor of Arts in 1929 and was a member of the first AUSTRALIAN Women’s Hockey team to go to England in 1930. After that tour, she remained in England to do a course in massage and, after a brilliant pass, devoted her talents to the exercise of her profession, gaining considerable commendation for her work for the health and welfare of women.

In 1937 she revisited Australia and renewed friendships with her old school former school-fellows. Her generous, sunny nature gained friends during her lifetime and the tale of her cheerful heroism in danger and agony will surely inspire others in dark days.

Barbara Thomas died at her post – the first of our number to give her life in time of war. May her example shine before us as we do the task that lies at hand. 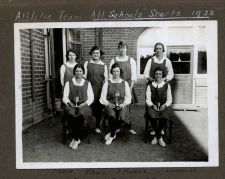 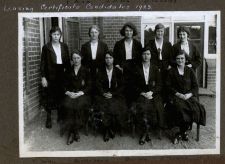 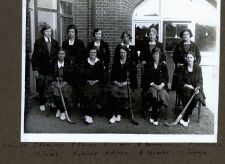